Vagrant Drupal Development (VDD) is fully configured and ready to use development environment built with VirtualBox, Vagrant, Linux and Chef Solo provisioner. VDD is virtualized environment, so your base system will not be changed and remain clean after installation. You can create as many environments as you wish without any consequences.

The main goal of the project is to provide easy to use fully functional, highly customizable and extendable Linux based environment for Drupal development.

Setup is very simple, fast and can be performed on Windows, Linux or Mac platforms. It's simple to clone an existing environment to your Laptop or home computer and then keep it synchronized. 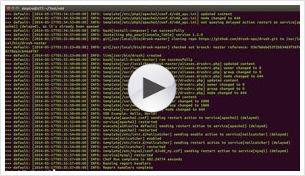 Recently I had to install the Vagrant Drupal Environment on a Window's 10 platform. I found many errors which impeded a normally quick install, that relate to many of the new upgrades in ruby, php, and mailcatcher chef entries. This caused a day of frustration, which I think will be resolved hopefully in the next few months. Here is what I found to accomplish a clean install on the Window's 10 platform.

Following the VDD normal build process locate here,  I ran into several issues which indeed listed on the bug report for VDD.

After install and provisioning, everything came up without a problem. All services are properly working and accessible.

Drupal 8.4.x New Features
Using Camtasia to Screencast
Why should I use a source repository?